LENI is so complicated it can be easy to confuse control systems with control techniques.

Control Systems (in LENI terminology) are illustrated by this graph:

There are four of them and they are to do with how (intelligent sensor controlled) lighting reacts to the presence and absence of (forgetful) people.

Fo, occupancy, is a measure of whether the room is occupied or not in a given time period.

Fo = 1 if the lights are controlled centrally and the controller (human or automatic) does not know or care whether the rooms are occupied or not.

Fo < 1 if the room lights are switched on and off according to whether the room is in use or not. Again it could be a manual human control system (on off switch) or an automatic presence detecting system.

The manual on/off switch presumably takes into account the fact that lights can be left on by mistake when a persons leaves and the room becomes empty.

Here's my own personal idea about the graph:

Then there are Control Techniques, there are eight of them, and specify how (intelligent sensor controlled) lighting reacts to the daylight supply of the room. To give them their full name they are Daylight-Responsive Control Techniques. They are summarized in this table:

This table needs some explanation. It is a look-up table, given three parameters you can lookup the output. The output is Fdc, used to calculate the Daylight Dependency Factor.

The first input is type of control, which is basically the first four columns in the above table. There are eight of them (from I to VIII).

The second input is daylight availability, as a simple choice between three options, Low Medium and Strong.

The third input is lux required, maintained illuminance, as an option between 300lx, 500lx and 750lx. 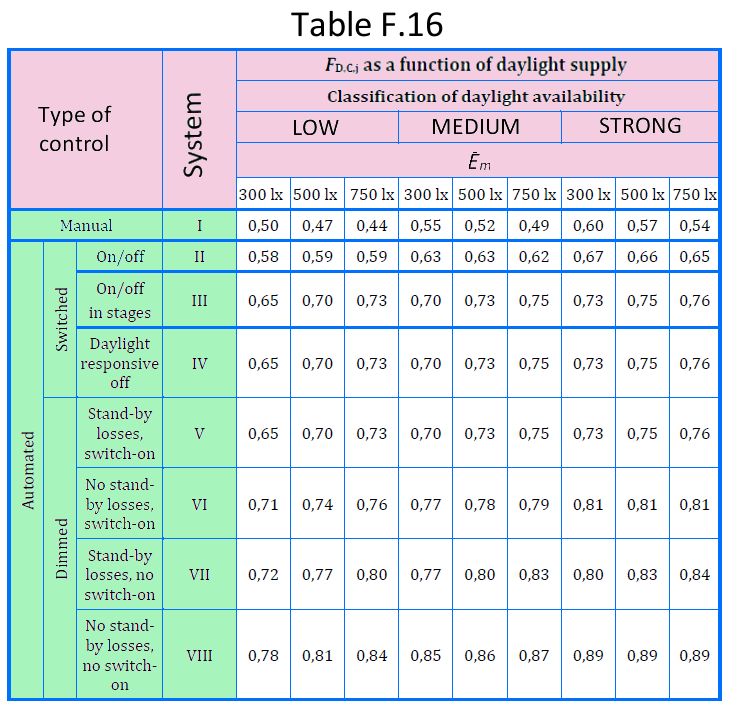 ...and the output from the table lookup is used in the formula for Fd...